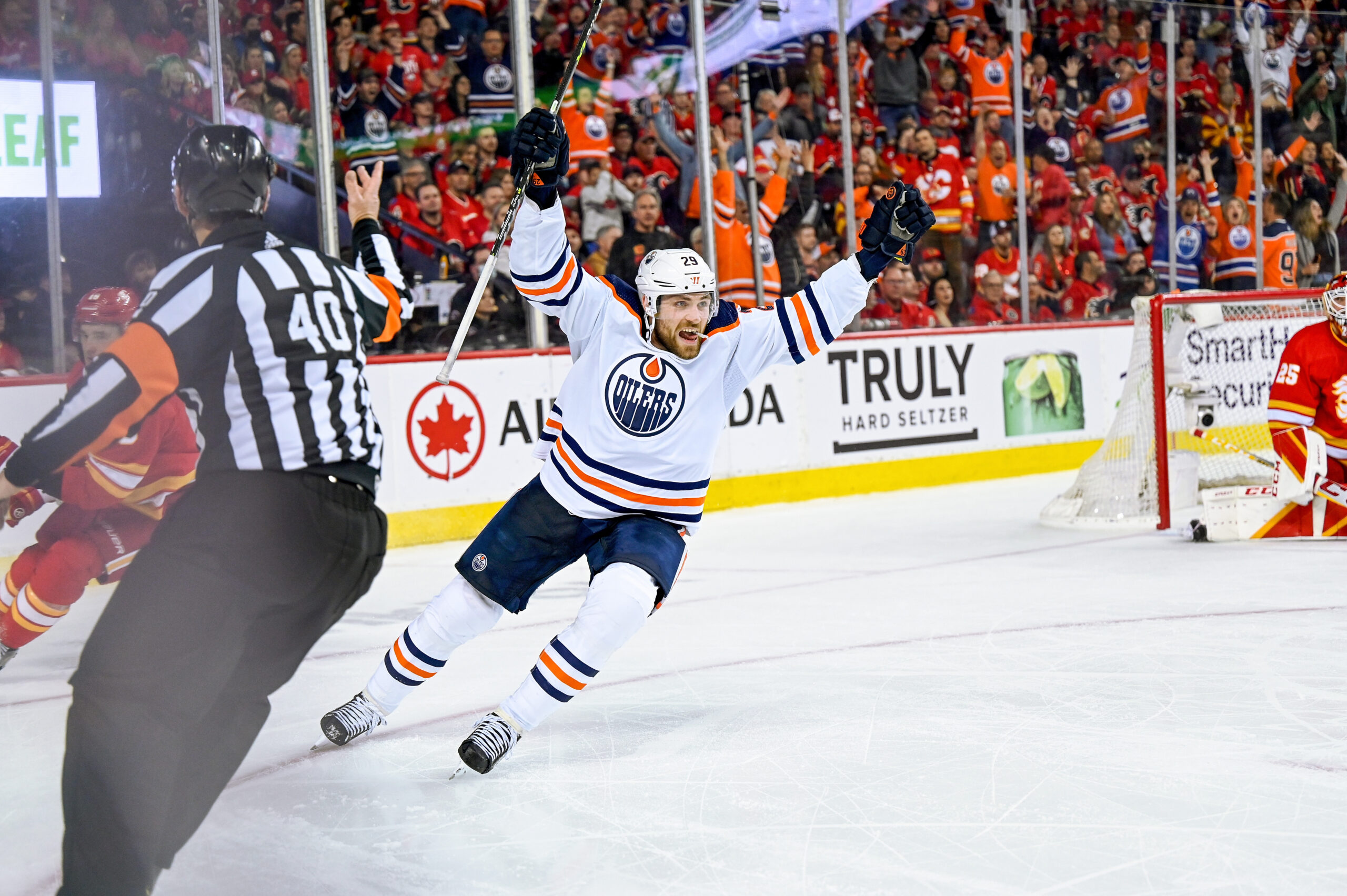 10 games into the 2022-23 NHL season, the Edmonton Oilers are 7-3-0. They started out a bit iffy on home ice, but since then, have rattled off five-straight wins and a perfect road record. They’re scoring in bunches and the defense is offering up opponents a few too many chances, but overall, things look good.

Specifically, the forwards are getting hot and that’s a great sign for the Oilers, a team that was considered to have the deepest and most dangerous top nine in the NHL. Let’s take a look at each player and offer up some grades based on their early performances.

Is there any other grade someone can give Connor McDavid than an A+? He’s got 22 points in 10 games, with 11 goals and 11 assists. He’s already scored two hat tricks on the season and could have easily had a third one in the team’s most recent game against the Nashville Predators.

McDavid has decided to shoot more and as a result, he’s going to score more. It’s hard to imagine a scenario where he doesn’t score 50 goals if he stays healthy this season. Let’s make an early prediction: he’s going to win the Rocket Richard Trophy this season.

Connor Mcdavid and Leon Draisaitl have a combined 43 points in ten hockey games. Draisaitl is one point behind McDavid in the standings and second in the NHL. His passing is sublime and his 16 assists lead the league. What’s so incredible about what he’s done this season is the production he’s bringing while not playing regularly on McDavid’s line.

He’s taken a real leadership role on this team as well and one could argue his off-season chat with McDavid about being a bit more selfish and shooting got McDavid in a different mind space.

With a hat trick in the game against Nashville, Kane potentially opened up the floodgates to more scoring. He started out a little slowly — in part because he was playing unselfishly and in part because of some unfortunate calls against him. He’s kept his cool, he’s been a strong teammate and he’s created multiple chances. He leads the team with 42 shots already and he’s provided a great 1A and 1B option with Zach Hyman on the Oilers’ power play.

The Oilers aren’t necessarily the most physical of teams but Kane provides an element the Oilers sorely need. He alone makes the rest of the roster stand a little taller.

Speaking of Hyman, he’s everywhere. Dogged on the puck, playing special teams, creating chances and forechecking like a man possessed, Hyman is often the Oilers’ most effective player night in and night out. He’s got skill, but not McDavid and Draisaitl’s skill, so he has to work to create his own chances. It’s hard to argue anyone works harder.

Hyman’s hard work in front of the net could easily have garnered him a couple more goals on the season. He’s already got six. Imagine what the Toronto Maple Leafs must be thinking right now.

Talk about a turnaround. Ryan Nugent-Hopkins looks like the player the Oilers had always hoped he’d be on offense while being an unsung hero on the power play this season. He’s crucial to the way the man advantage operates and he’s adding points five-on-five, which was a knock on his play in seasons past.

Nuge is always useful on the penalty kill and he’s got 12 points in 10 games.

Ryan McLeod looks like he’s taking a huge next step in his development. He’s definitely an NHL’er at this point and he’s given the Oilers the freedom to run Nugent-Hopkins on the top line because McLeod is pushing the river on the third line, while playing on the second power-play unit. He’s got three goals in 10 games and while his scoring has dropped off in the last few games, he’s still incredibly effective.

His ability to fly through the neutral zone and get the Oilers set up is perhaps third on the team to Connor and Leon and his speed is right up there with McDavid.

He’s only scored once, and the Oilers need him to do more than that. Still, Jesse Puljujarvi has been effective on the forecheck, creating chances and helping his linemates. He’s part of a solid third line and he’s helping keep the Oilers in the offensive zone. If he can get a couple of goals in the next couple of games, anyone who is on him a bit for his lack of goal-scoring will back right off. He’s second on the team in hits with 24.

Bonus points go out to The Bison King for his Halloween costume. It was incredible.

Derek Ryan doesn’t play a ton of minutes, but in the minutes he does play, he’s effective. That’s exactly what the bottom six needs and because he’s serving his role quite well, his grade is reflective of the job he’s asked to do. It’s hard to be a difference-maker in under 10 minutes per game, but he’s arguably doing that. He leads the forwards in blocked shots, and is a regular on the penalty kill.

Foegele has been another important part of the Oilers’ puzzle, even if the scoresheet doesn’t necessarily reflect his usefulness. He’s only got one assist on the season but he’s looking engaged and he’s third on the team in hits. If he’s not going to score, what they need him to do is play hard, create turnovers and get in on the cycle. He’s doing all of that. One can only hope the goals will start to come.

Shore gets an average grade because he’s not necessarily a difference-maker, but he’s not been a hindrance to the Oilers either. In fact, in the game against Nashville, he was fairly effective. He’s played in nine games this season has one assist, and is a plus-minus +2. He’s second-last on the team in shots on the net.

Yamamoto needs to score. With three assists, he is contributing and he’s been in on a few nice plays to get that second line on the board regularly, but this is a 20-goal player the Oilers need to have potting a few goals every now and again. His spot in the top six is secure for now, but how long that lasts if he doesn’t hit the back of the net remains to be seen.

If the Oilers do end up making some kind of in-season trade, there’s a real possibility GM Ken Holland will have to heavily weigh Yamamoto’s potential value around the league versus the value in keeping him.

Dylan Holloway’s grade is not a reflection of where I see him at the end of the season. Signs are good that he’s starting to figure it out and he’s looked more effective of late. That said, he had a rough start to the season with a nasty turnover that saw him benched, then he took a hit that knocked him out of action for a few games. He gets creamed far too often and that’s a bit worrisome.

That head coach Jay Woodcroft has moved him to center will help as the team can better utilize his speed and playmaking ability. I expect, when I write these grades again in about a month, he’ll be much higher up than he is now.