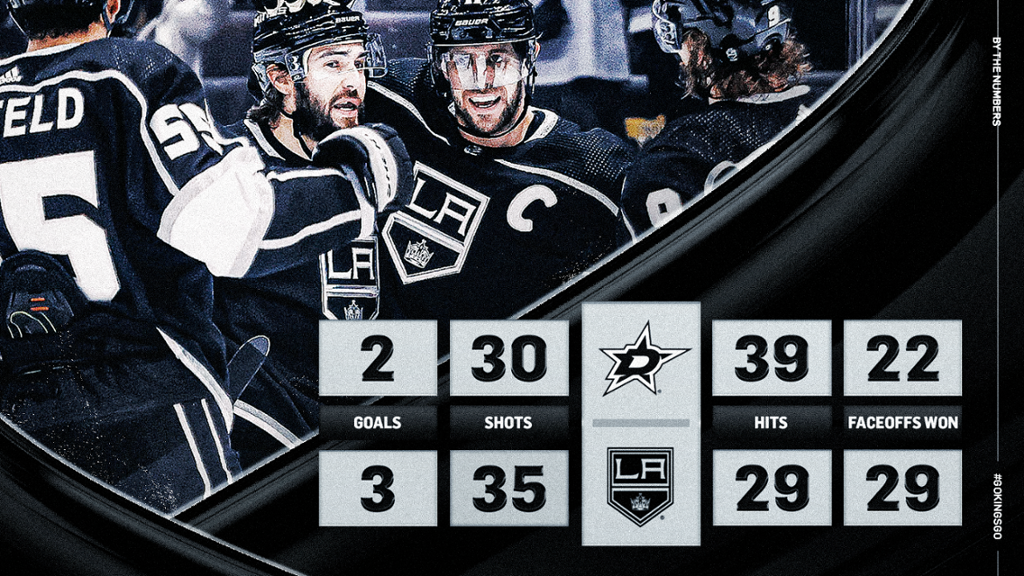 Kicking off the new year, the played their 41st game, officially hitting the halfway point of the season. Facing off against the Central Division leading Dallas Stars for the second of three times this season, the Kings avenged their November 1st loss in the Lone Star State to take home two points and move closer to the top of the Pacific Division.

Showcased on ESPN, the Kings and Stars faced off at Crypto.com Arena on Tuesday night. The tightly contested game saw five goals, one of which came on the man advantage. Opening the game’s scoring was Rasmus Kupari, who took a pass from Kevin Fiala at the offensive blue line and ripped a wrist shot over the glove of Stars goalie Jake Oettinger after entering the zone midway into the first period. Kupari’s goal marked his third of the season and his 20th career point in the NHL. Moving into the second period, the offense quickly picked up as the game saw three goals between the teams across just a 2:38 span. The goalscoring began with a seeing-eye shot from the point by Stars defenseman Miro Heiskanen to even the game at one apiece. Quickly, in Kings fashion the men in their home black jerseys responded when Anze Kopitar redirecting in a Drew Doughty point shot to regain the lead. Kopitar’s goal marked his 11th of the season and was his first goal in 10 games. Another Stars goal followed just 56 seconds later when Joe Pavelski set up Jason Robertson for his 26th goal of the season.

The two teams entered the third period tied at 2-2 with the Stars leading in the shot department 25-22. There, the Kings took over game, scoring the lone goal of the period and outshooting the Stars 13-5. That lone goal came off of the stick of Adrian Kempe with 10:35 remaining in the game. On the power play, Gabriel Vilardi sprung the Fiala and Kempe for a 2-on-1 where Fiala would find Kempe backdoor for the go-ahead goal. Goalless the remainder of the game would go and the Kings earned another two points, making it seven wins in their last nine games.

Pheonix Copley stopped 28-of-30 shots for his seventh consecutive victory, establishing a new career high and improving his record to 9-1-0 this season.